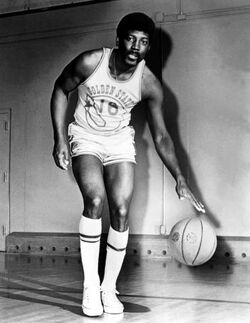 Alvin A. "Al" Attles Jr. (born November 7, 1936 in Newark, New Jersey) is an American retired professional basketball player and coach. He is a graduate of Weequahic High School in Newark and North Carolina A&T State University.[1] Attles played eleven seasons for the National Basketball Association's Philadelphia and San Francisco Warriors, beginning in 1960. He was a role player on the 1964 Warriors team (with Wilt Chamberlain and Guy Rodgers) that made the NBA Finals and eventually lost the championship series to the Boston Celtics, four games to one. Attles also played on the Warriors' 1967 team that lost to Chamberlain's 68-13 Philadelphia 76ers in an evenly-matched, six-game championship series.

Attles later became one of the first African-American coaches in the NBA when he succeeded George Lee as Warriors head coach in 1970. Attles guided the Rick Barry-led Warriors to the 1975 NBA championship, making him the second African American coach to win an NBA title (the first was Bill Russell). Attles coached the Warriors until 1983, compiling a 557-518 regular season record (588-548 overall) with 6 playoff appearances in 14 seasons.

Attles's number 16 is retired by the Golden State Warriors and he attends every Warriors home game. He also serves as a team ambassador.[2]

Retrieved from "https://basketball.fandom.com/wiki/Al_Attles?oldid=55598"
Community content is available under CC-BY-SA unless otherwise noted.