Basketball Wiki
Register
Don't have an account?
Sign In
Advertisement
in: Born in 1976, Retired, Utah Alumni,
and 27 more

Miller played college basketball at the University of Utah. He became a starter at point guard early in his freshman season, and remained a team leader throughout his career at the school. In 1997, following the graduation of Keith Van Horn, Miller and Michael Doleac took charge of the team, and they led the Runnin' Utes to the championship game of the 1998 Final Four. It was during that tournament run that Miller gained national attention.

Utah faced Arizona in the West Regional finals. The Wildcats were defending national champions and the top seed in the region, and thus were heavily favored over the Utes. Arizona boasted an All-American guard line of Mike Bibby, Miles Simon, and Jason Terry, but Miller wasn't intimidated. He single-handedly dominated the Wildcats, totaling 18 points, 14 rebounds, and 13 assists in the game.[4] It was just the fourth triple-double in the recorded history of the NCAA tournament. Utah won in a rout, 76-51.

With Miller leading the way, the Utes continued their surprising run all the way to the title game, where they ultimately lost to Kentucky 78-69. Miller was a national star during his senior season (1999), earning First Team All-America honors from the Associated Press, the NABC, the Sporting News, and USBWA. Also, he was named Player of the Year in the Western Athletic Conference (WAC), in addition to First Team All-WAC and WAC All-Defensive Team honors. He finished his career as Utah's all-time leader in steals (254) and second all-time in assists (721). He left the school with a Bachelor's degree in Sociology.

Miller was drafted by the Cavaliers with the 8th overall pick of the 1999 NBA Draft, and averaged 11.1 points and 5.8 assists per game in his rookie year. In his second year he averaged 15.8 points per game and 8 assists per game. In his final year as a Cavalier his averages increased to 16.5 points and 10.8 assists per game. During his career as a Cavalier he was named to the NBA All-Rookie First Team, became the first player in Cleveland history to win player of the week twice, set a franchise record for total assists in a season (882) and was the only NBA player to average 10+ assists and points during the 2001–02 NBA season. He played for the U.S. national team in the 2002 FIBA World Championship.[5]

On July 30, 2002 he was traded along with Bryant Stith to the Clippers in exchange for Darius Miles and Harold Jamison.[6] He spent only one year with the Clippers before finding his way to the Nuggets. After signing a multiyear contract with the Nuggets in 2003, Miller, as point guard, played an integral role in the Nuggets' resurgence.

Miller tied his playoff career high of 31 points in a first-round opening win against the Phoenix Suns on April 18, 2010.[11]

In December 2010, Miller's streak of 632 straight games ended because of a suspension for a game after shoving Clippers player Blake Griffin. The shove was missed by the refs and not called as a foul during the game with the suspension handed after review.

Return to the Nuggets 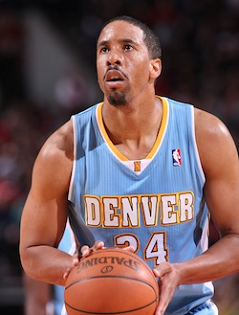 During the 2011 NBA Draft on June 23, 2011, Miller was involved in a trade sending him to the Nuggets along with the rights to #26 draft pick Jordan Hamilton in exchange for Raymond Felton. In his first game back with Denver, Miller finished with 18 points, 5 rebounds, 5 assists, 3 steals, and a block in a 115-93 win over the defending champion Dallas Mavericks.