Baron Walter Louis Davis (born April 13, 1979) is an American former professional basketball player who is a studio analyst for The NBA on TNT. He is a two-time NBA All-Star. Davis became a star at Crossroads School (Santa Monica, California) and UCLA. Davis was drafted by the Charlotte Hornets as the third pick in the 1999 NBA Draft.

Davis was born in Los Angeles, California. His grandmother and guardian, Lela Nicholson, was instrumental in pushing him to play basketball. With her encouragement, he eventually earned a scholarship to attend Crossroads School, a prestigious private school in Santa Monica, California.

As a senior at Crossroads, Davis led his team to the Championship of The Beach Ball Classic tournament in Myrtle Beach, South Carolina over perennial prep powerhouse Christ The King Regional High School (Queens, New York), while earning MVP honors and a spot on the All-Tournament team along with future St. John's standout Erick Barkley at that prestigious event. That year, Davis was also named Gatorade National Player of the Year and a Parade All-American. He was also selected to play in the prestigious McDonald's All-American High School Basketball Game in Colorado Springs, Colorado in 1997, playing with future NBA players Elton Brand, Shane Battier, Larry Hughes and Ron Artest, and winning the Sprite Slam Dunk Contest despite being the smallest man in the competition at 6'2."[1]

After a highly contested recruiting battle that saw Kansas, Georgia Tech, Duke, and UCLA in hot pursuit for his services, Davis selected UCLA as his school of choice, so that he could play in front of his family and friends. During this time, Davis was involved in a minor scandal pertaining to his driving a 1991 Chevy Blazer that was a gift from his sister, then a UCLA employee. The car was sold to her by a member of Jim Harrick's family. At the time, Harrick was the UCLA men's basketball coach, presenting both a conflict of interest and a potential recruiting violation, since rumor had it that the car was purchased below market value. The incident was cleared up when it was discovered that Davis' sister had, in fact, bought the car at the listed blue-book price. Davis then enrolled at UCLA in 1997 without problem. In 1998, Davis was named the Pac-10 Freshman of the Year and made the All-American Third Team by his sophomore year in 1999.[2]

In Davis' two years at UCLA, he averaged 13.6 points and 5.1 assists for the Bruins. While coming down from a dunk during an NCAA Tournament game his freshman year, he injured his knee and tore his Anterior cruciate ligament (ACL). Surprisingly, though, he made a full recovery the next season and seemed to have regained nearly all of the speed, quickness, and explosiveness he had before the injury while doing enough on the basketball court to warrant his declaring for the 1999 NBA Draft after his sophomore campaign[3].

Davis was the third pick in the 1999 NBA Draft by the Charlotte Hornets. In his NBA debut, a 100–86 win over the Orlando Magic, Davis scored nine points, and added five rebounds, two assists and two steals. In Davis' first year, he backed up Eddie Jones and David Wesley, but by Davis' second year he started all 82 games for the Hornets. Davis would lead Charlotte to the second round of the playoffs in back-to-back years, the first being a sweep of the Miami Heat in the 2001 NBA Playoffs. The next season, Davis started all 82 games again while averaging 18 points a game and 8.5 assists per game. He was also selected as an injury replacement for Vince Carter in the 2002 NBA All-Star Game. In the summer of 2002 the Charlotte Hornets moved from Charlotte, North Carolina to New Orleans, Louisiana. Davis would lead the Hornets back to the playoffs, but the next two years were first round exits. Injuries would plague Davis for much of his tenure in New Orleans.

He played for the US national team in the 2002 FIBA World Championship.[4]

On February 24, 2005, Davis was traded from the Hornets to the Golden State Warriors for guard Speedy Claxton and veteran forward Dale Davis after tension with the Hornets coaching staff and several nagging injuries[5]. The move created one of the more potent backcourts in the NBA with Davis and star guard Jason Richardson. It also saw Davis' return to California where he craved to return to since his college days in UCLA.

After two seasons in which the Warriors underachieved under coach Mike Montgomery, the Warriors hired former coach Don Nelson for the 2006–2007 season. His high scoring offensive system was designed to fit Davis's uptempo style. Although Davis suffered through knee soreness and underwent surgery during the season, he still led the Warriors to their first playoffs since 1994. The Warriors swept the regular season series against the Mavericks 3–0 giving them an advantage and won the series against the top seeded Dallas Mavericks 4–2, making them the 1st No. 8 seed to beat a No.1 seed since the NBA changed the 1st round from a 5-game series to a 7-game series. It was numerically the largest upset in the history of the NBA playoffs, with the 67–15 Mavericks having a record of 25 games better than the 42–40 Warriors. Davis averaged 25 points in the series. In the following series, against the Utah Jazz, the Warriors' run ended in 5 games.

Davis's performance in the 2007 NBA Playoffs drew praise from basketball analysts and fans alike, with a few claiming Davis to be the best player in the post-season.[6] Davis' playoff highlights included numerous acrobatic layups, a half-court three-pointer at the buzzer, and a memorable dunk over Andrei Kirilenko. The Jazz eliminated the undersized Warriors 4 games to 1.[7] Davis averaged 25.3 points, 6.5 assists, 2.9 steals, and 4.5 rebounds per game in the 2007 Playoffs.[8]

After the 2007–08 season, in which Davis failed to guide the Warriors to the playoffs, Davis's agent Todd Ramasar claimed that Davis might opt out of his contract with the Warriors, which would have paid him $17.8 million, to pursue other options.[9] This was seen as evidence of a rift between Davis and coach Don Nelson growing after Nelson pulled Davis from a playoff elimination game against the Phoenix Suns due to Davis's poor playing and shooting (2–13 in 17 minutes; the Warriors were down 14 points when Davis left the game, losing by 6).[10][11][12] On June 30, 2008, Davis opted out of his contract with the Golden State Warriors.[13]

On July 1, 2008 Davis verbally agreed to a 5-year, $65 million dollar deal to play for the Los Angeles Clippers[14], and officially signed with the Clippers on July 10, 2008.[15] Although Davis committed to joining the Clippers with the intention of playing with Elton Brand (who had opted out of his contract but was expected to re-sign with the Clippers but later signed with the Philadelphia 76ers) Davis still signed and said that Brand's departure had no impact on his decision to come to Los Angeles.

On December 19, 2011, Davis signed a one-year contract with the New York Knicks, choosing New York over the Lakers and Heat who also expressed interest in signing Davis. At the time of the signing, Davis had a herniated disk in his back. He did not make his debut for the Knicks until February 20, 2012, coming off the bench to score a three-pointer along with an assist.

Davis took over as the Knicks' starting point guard following the season-ending injury to Jeremy Lin. He also started the four playoff games he played in. On May 6, 2012, during Game 4 of the first round of the playoffs in New York's win against the Miami Heat, Davis injured his right knee while dribbling down the court. He was carted off the court on a stretcher. He underwent surgery after an MRI revealed a partial tear of the patellar tendon in his right knee and complete tears of the right ACL and MCL.

Davis became an unrestricted free agent in the summer of 2012, but he was expected to be out until May 2013 while recovering from his surgery.[38] He made a return to the basketball court in July 2015, scoring 44 points in the Drew League (which was the subject of his documentary "The Drew: No Excuse, Just Produce"), and subsequently announced his interest in returning to the NBA. On January 15, 2016, he signed a contract to play in the NBA Development League,[42] and on March 2, he was acquired by the Delaware 87ers. Two days later, he made his D-League debut in a 114–106 loss to the Iowa Energy, recording eight points, one rebound, four assists and three steals in 19 minutes off the bench.[44] In six games for Delaware to conclude the 2015–16 season, Davis averaged 12.8 points, 2.5 rebounds, 3.5 assists and 1.2 steals per game. 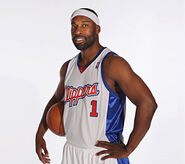 Add a photo to this gallery

Retrieved from "https://basketball.fandom.com/wiki/Baron_Davis?oldid=63723"
Community content is available under CC-BY-SA unless otherwise noted.