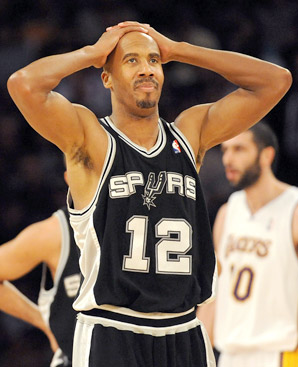 Bruce Bowen Jr. (born June 14, 1971) is an American professional basketball player. The 6'7" (200 cm), 200 lbs (91 kg), Bowen plays small forward for the San Antonio Spurs of the National Basketball Association (NBA). He is an alumnus of Edison High School (Fresno, California)[1] and Cal State Fullerton and also a former member of the NBA's Miami Heat, the Boston Celtics, the Philadelphia 76ers and the CBA's Rockford Lightning, also having played abroad in France.

Regarded as one of the best defenders in the NBA, Bowen has been elected eight times to the NBA All-Defensive First and Second Teams, and was a member of the Spurs teams that won the NBA championships in 2003, 2005 and 2007.[2] Off the court, Bowen is an informal ambassador for child obesity awareness.

Bruce Bowen Jr. was born in Merced, California as son of Bruce Bowen Sr. and Dietra Campbell. Bowen had a problematic childhood growing up in Merced, because, he claims, his mother took drugs and even sold the family TV to feed her habit.[1] Bruce Jr. spent his days playing basketball and eventually became a star in the local West Fresno Edison High School squad.[1] After receiving a scholarship, Bowen played four seasons at Cal State Fullerton, appearing in 101 games, and averaged 11.4 points and 5.8 rebounds per game.[3] After averaging 16.3 points, 6.5 rebounds and 2.3 assists in 36.6 minutes in 27 games as a senior in 1992–93, he was named to the All-Big West Conference First Team. Bowen ranks 12th on the Titans’ all-time list in career points (1,155) and is seventh all-time in rebounds (559).[4]

Bowen made himself eligible for the 1993 NBA Draft, but went undrafted. Instead, he seemed to be destined to become a journeyman athlete. Between 1993 and 1997, Bowen frequently changed teams, playing for the French teams of Le Havre in 1993–94 and Evreux the following season. In 1995–96 he played in the CBA with Rockford Lightning; he spent the next season back in France with Besançon, before returning to the Lightning in February 1997. Bowen made his NBA debut when he was signed to a ten-day contract by the Miami Heat the following month. His output consisted of 1 game, 1 minute and 1 block.[4][3]

In the 1997-98 NBA season, Bowen reappeared in the NBA, having been signed by the Boston Celtics. With the Celtics, Bowen slowly established himself in the NBA. In his first full year as an NBA player, he appeared in 61 games (nine of them as starter) with the Celtics, averaging 5.6 points, 2.9 rebounds and 1.43 steals in 21.4 minutes per game, shooting .409 from the field, .339 from three-point land and .623 from the free throw line.[3] The next year was for him a disappointment, as Bowen appeared in only 30 Celtics games, averaging 2.3 points and 1.7 rebounds in 16.5 minutes per game.[3]

In the 1999-2000 NBA season, Bowen signed with the Philadelphia 76ers, traded to the Chicago Bulls and immediately waived, being picked off waivers by the Miami Heat. In that season, he wore jersey #12 instead of #30 and appeared in 69 games, averaging 2.8 points and 1.4 rebounds in 12.7 minutes per game, and scored in double-figures six times.[3] In the following year, Bowen was retained by the Heat. In that year, he had his breakout season. For the first time in his career, he played in all 82 regular season games, averaged 7.6 points, 3.0 rebounds, 1.6 assists and 1.01 steals in 32.7 minutes per game and set new single season career-highs in games, points, rebounds, assists, blocks, minutes, field goals made and attempted, three-point goals made and attempted and free throws made and attempted.[3] Bowen logged more minutes (2,685 vs. 2,678), scored more points (623 vs. 606) and hit more threes (103 vs. 54) then he had in his first four seasons combined.[3] Especially, Bowen earned himself a reputation as a defensive stopper. For his strong perimeter defense, he was voted into the All-Defensive Second Team.[2]

In the 2001-02 NBA season, Bowen was signed by the San Antonio Spurs. He joined a championship-caliber team, led by veteran Hall-of-Fame center David Robinson and young power forward Tim Duncan, complemented by talented role players like Steve Smith, Malik Rose, Antonio Daniels and point guards Terry Porter and Tony Parker. Bowen established himself as a starter, beginning in each of his 59 regular-season games.[3] In that season, Bowen received his first of several fines: he had to pay $7,500 for kicking Wally Szczerbiak in the face during a March 1, 2002 game.[5] In the 2002 NBA Playoffs, Bowen started in all 10 Spurs playoffs games, where the team eventually succumbed to the Los Angeles Lakers. For his feats, Bowen earned himself his second All-Defensive Second Team nomination,[3] although several peers and sports analysts accused him with being a "dirty" defender.[6]

In the next season, Bowen started in all 82 regular season games for the second time in his career and averaged 7.1 points, 2.9 rebounds and 1.4 assists in 31.3 minutes per game. Again, he was voted into the All-Defensive Second Team and was member of the Spurs team which won the 2003 NBA Finals. At age 31, the one-time journeyman Bowen had won his first championship ring as a starter.[3] In the following three seasons, Bowen established a reputation as the best perimeter defender in the NBA, earning three straight All-Defensive First Team elections and ending as runner-up in the NBA Defensive Player of the Year Award votings twice, losing to post defender Ben Wallace.[7][8]

Bowen was a member of the Spurs squad which was defeated 4–2 by the Los Angeles Lakers in the Western Conference Semi-Finals of the 2004 NBA Playoffs. Having established himself as the premier defensive backcourt player, Bowen's effective, but hard nosed style of play came under discussion. In particular, rival guards Vince Carter and Steve Francis accused him of encroaching into their landing space during their jumpshot.[6] Inside Hoops columnist M.J. Darnell commented: "They're whining because Bruce Bowen has frustrated, upset, hurt or angered them in some way.... He just plays tough, physical defense, does not play with any intent to injure, but isn't afraid to get in someone's grill".[9]

Bowen and the Spurs bounced back and won the NBA title in 2005. The Spurs could not win back-to-back titles, however, and bowed out 4–3 in a seven-game series against the Dallas Mavericks in the 2006 NBA Playoffs. As a testament to his controversial style of play, Bowen picked up a $10,000 NBA fine for kicking Ray Allen in the back during a March 2006 game.[10]

In the 2007 NBA Playoffs, the Spurs played against the Phoenix Suns, and Bowen became the center of controversy. His knee contacted Phoenix Suns guard Steve Nash's groin, knocking Nash to the floor. Also in that series, forward-center Amare Stoudemire accused Bowen of kicking him during a game, but the NBA reviewed and dismissed the claim.[11] ESPN columnist Bill Simmons commented that Bowen was "a cheap player who's going to seriously hurt someone someday", but claims that he "ultimately makes his team better."[12] The Spurs went on to beat the Suns, and Bowen's defensive contributions also ensured that the Spurs won its fourth championship in the 2007 NBA Finals.[13]

In the 2007-08 NBA season, the now 36 year old veteran Bowen played and started in 81 of 82 regular season games, earning his fifth straight nomination in the the NBA All-Defensive First Team.[2] Ever controversial, Bowen was fined $7,000 and suspended for one game for kicking Chris Paul after Paul had fallen to the floor during a March 12, 2008 game.[14] Bowen finished as the runner-up behind Marcus Camby for the league's defensive player of the year award.[13] In the 2008 NBA Playoffs, Bowen was unable to stop Los Angeles Lakers guard Kobe Bryant, who averaged 28.3 points and helped L.A. beat the Spurs in five games.[15] Since becoming a member of the Spurs, Bowen has started in every Spurs regular season and playoff game from 2001 through 2008.[2]

In 2006 U.S. coach Mike Krzyzewski invited Bowen to join the United States men's national basketball team, which participated in the 2006 FIBA World Championships in Japan. At 35, he was the oldest player to participate; Krzyzewski said that the team needed a defensive player like Bowen. However, Bowen received little playing time, despite the injuries of fellow swingmen and guards Antawn Jamison, Carmelo Anthony and Dwyane Wade. Although he participated in several training sessions and training camps, Bowen was eventually cut from the team. He expressed disappointment and said he hoped to make the 2008 Olympics squad,[16] but was not named to the team in the end.

Bowen is not known for his offensive production. He is seldom sought on offense, having never attempted more than 251 field goals in an entire 82-game regular season, and his career averages of 6.4 points, 2.8 rebounds and 1.3 assists per game, and .566 foul shooting are considered mediocre, never earning him nominations for NBA All-Star or All-NBA First or Second Teams.[2] His foul shooting, in fact, is poor enough that he has at times been made the target of the so-called "Bruise-a-Bruce" defense. However, opposing teams cannot leave Bowen wide open on offense, because he is also an accurate three-point shooter (.388 career average on 1,700+ attempts).[2] In addition, despite his age Bowen played 500 consecutive games between February 28, 2002 and March 12, 2008, leading Sports Illustrated to name him in 2007 the "Iron Man" of the NBA.[18]

Responding to fan e-mail in 2005, Bowen stated that defense is "a little bit of talent and a lot of work; being able to take on the challenge of going up against the top guys, even when you didn't win that battle. Being able to come back the next day and try again — I think that's the most important thing." He also stressed that the key to being a good basketball player is to "work hard and make sure you have fun with the game more than anything else." Bowen mentioned that he considers Denver Nuggets small forward Carmelo Anthony and former Seattle SuperSonics shooting guard Ray Allen (now with the Boston Celtics) to be among the most difficult players to guard.[19]

Bowen is the son of Bruce Bowen Sr. and Dietra Campbell. He told a reporter of having a problematic childhood, plagued by his mother's drug addiction and his father's alcohol problems.[1] Today, Bowen is estranged from his parents and several relatives, instead looking up to his childhood friend Quinn Crozier and to Robert and Sandra Thrash, a Los Angeles couple whom he regards as his adoptive parents.[1] Bowen is married to Yardley Barbon, and the couple have two sons, Ojani (born September 7, 2005) and Ozmel (born June 9, 2007).[3] He often speaks out against child obesity and runs his own "Get fit with Bruce and Buddy" program for children's healthy nutrition and daily sports activities. He is a fan of the Dallas Cowboys, whom his nephew, Stephen Bowen plays for, and the University of Texas Longhorns football team. He runs the Bruce Bowen Foundation, an organization set up to provide scholarships and bursaries. In addition, he is working on his college degree in communications from Cal State Fullerton, taking classes at nearby University of Texas at San Antonio, and has stated that he wants to become a teacher after his NBA career.[3]

Retrieved from "https://basketball.fandom.com/wiki/Bruce_Bowen?oldid=55010"
Community content is available under CC-BY-SA unless otherwise noted.