Danilo Gallinari (born August 8, 1988) is an Italian professional basketball player currently playing for the Oklahoma City Thunder. He is 2.08 m (6 ft 10 in) in height and 102 kg (225 lbs) in weight.[1] He plays mainly at the small forward position, but he can play at all five positions on the basketball court.

Danilo Gallinari began playing professionally at age 15 in 2004 for Casalpusterlengo, a team in the Italian B1 League.

In 2005, Gallinari was acquired by Armani Jeans Milano, which then sent him to Edimes Pavia, a team competing in the Italian league second division championship during the 2005-2006 season, so that he could earn more experience with extended playing minutes. Even though he played only half of the season due to an injury, in 2006 he was nominated as the best Italian player of the Italian league second division championship, averaging 14.3 points, 3.4 rebounds, 2.0 steals, and 0.8 assists in 17 games.[2]

In 2006, he was recalled by Olimpia Milano to play in the 2006-2007 Italian league first division championship and also in the second level tier European wide cup competition, the ULEB Cup. In his first season in the top Italian division, Gallinari was named as the league's best player under the of age 22, averaging 10.9 points, 4.0 rebounds, 1.7 steals, and 1.0 assists per game in 34 regular season games and 11.5 points, 3.7 rebounds, 2.1 steals, and 0.9 assists per game in 8 playoff games.[3] During the season he also won the 2007 Italian All Star Game 3-point shootout contest.

In the 2007-2008 season, he also played for the first time in the elite Europe-wide Euroleague competition, which is the first tier level continental cup competition of Europe. In the Euroleague he averaged 14.9 points, 4.2 rebounds, 1.7 assists, and 1.5 steals per game in 11 games; he posted a season-high 27 points against Maccabi Tel Aviv in his final game.[7] He made an instant impact on basketball courts around the continent and he was subsequently named as the Euroleague 2007-08 season's "Rising Star" award winner.

His contract with Olimpia Milano had an escape clause for playing professionally in the United States, effectively eliminating major encumbrances that would have prevented him from joining the NBA. On April 23, 2008, he decided to declare himself eligible for the 2008 NBA Draft.

Gallinari was drafted 6th overall in the 2008 draft by the New York Knicks. He then signed a two-year contract with the team.[8] Just one game into the 08-09 season it was announced Gallinari would most likely miss most of the remainder of the season due to back problems.[9] Despite his back problems, he came back into play on 17 January, during a game the Knicks lost to Philadelphia. On 4 March, Gallinari scored a career-high 17 points against the Atlanta Hawks, shooting 4-5 on three-point field goal attempts.

Gallinari has been a member of the Under-16 and Under-18 junior men's Italian national basketball teams. He played at the 2004 FIBA Europe Under-16 Championship and he won the bronze medal at the 2005 FIBA Europe Under-18 Championship. He was also selected as a member of the senior men's Italian national basketball team for the 2007 European Championship, but he was forced to withdraw due to an injury that he suffered during the preparation before the tournament. 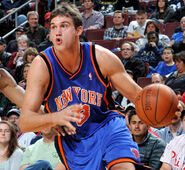