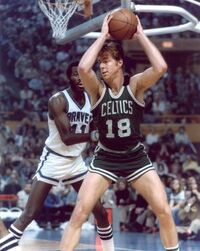 David William Cowens (born October 25, 1948) is an American retired professional basketball player who played mostly throughout his career with the Boston Celtics and a former NBA head coach. He played at center and occasionally the power forward position. He was inducted into the Naismith Memorial Basketball Hall of Fame in 1991. Most recently he served as an assistant coach for the Detroit Pistons.

Retrieved from "https://basketball.fandom.com/wiki/Dave_Cowens?oldid=60063"
Community content is available under CC-BY-SA unless otherwise noted.