Basketball Wiki
Register
Don't have an account?
Sign In
in: Born in 1981, Retired, American basketball players,
and 12 more

Jason Anthoney Richardson (born January 20, 1981) is an American former professional basketball player. He was drafted 5th overall in the 2001 NBA Draft by the Golden State Warriors out of Michigan State. Richardson won back-to-back NBA Slam Dunk Contests in 2002 and 2003, being the second player after Michael Jordan to do so.

The Warriors drafted Jason Richardson out of Michigan State University with the 5th overall pick. It was while playing for Michigan State that he and fellow current NBA players Mateen Cleaves, Charlie Bell, and Morris Peterson (and current Melbourne Tiger and NBL first-teamer Dave Thomas) won an NCAA National Championship.

During his time with Golden State, Richardson gained popularity for his outstanding scoring, dedication to the team and fans, and ethical maturity.[2][3] The long time captain of the Warriors, Richardson organized a letter of apology to Warrior fans after the team failed to make the playoffs for the 12th straight season. The letter ran in several Bay Area newspapers. The following year, Richardson helped lead the Warriors to their first playoff game in 13 years. They won in the first round, upsetting the top-seeded Dallas Mavericks, but lost in the second round to the Utah Jazz.

Although no longer playing for Golden State, Richardson remains one of the most popular players among Warrior fans because of his electric style of play and ability to shoot three-pointers, as well as the longevity and tenor of his tenure with the team.[4] Richardson set the Warrior franchise record for three-pointers made in a game without missing (8) in a home win against the Phoenix Suns.[5] Richardson is especially known for his high-flying abilities and is widely regarded as one of the best dunkers in the NBA today.[6][7] He won the NBA Slam Dunk Contests in 2002 and 2003, joining Michael Jordan as the only players to have won in consecutive years. Richardson competed in the 2004 contest as well, but lost to Fred Jones in the finals.

Richardson began to gain attention with the Bobcats when he led the team to a road win against the Boston Celtics after scoring 34 points. This was only the Celtics' fourth loss of the season and second loss at home.[8] It was also the Bobcats' second road win of the season, ending an 11 game road losing streak. Richardson also led the Bobcats to a franchise-record five consecutive game winning streak, including a home win against his former team, the Golden State Warriors. Richardson posted 42 points against the Warriors.[9] The 2007–08 season was a season of rebuilding for Richardson and the Bobcats. He was able to get his points per game average back up to 21.8, lead the Bobcats in scoring, and lead the league in three-point field goals made.

On December 10, 2008, Richardson was traded along with Jared Dudley, and a 2010 second round pick to the Phoenix Suns for Boris Diaw, Raja Bell, and Sean Singletary.[10]

Legal Problems off the Court

Since being acquired by the Phoenix Suns, Richardson has been involved in two off-court legal issues involving Arizona police agencies:

On December 21, 2008, Richardson was cited for driving while under the influence of alcohol by the Salt River Pima-Maricopa Indian Community Police. Court action on this incident is pending at this time. [11]

Richardson was arrested and briefly detained again on February 15, 2009 by Scottsdale, Arizona police after he was observed driving at a high rate of speed. According to police reports, Richardson was clocked doing 90 MPH in at 35 MPH zone. When stopped, it was discovered that the Sun's star had his young son, age 3, in the back seat unrestrained. Richardson was booked by Scottsdale Police for criminal speeding, reckless driving, and reckless endangerment of a child.[12]

Following the later incident, Richardson was suspended without pay by the Suns for one game for "Conduct detrimental to the Team". No Court date has been set at this time on these charges. 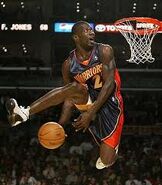 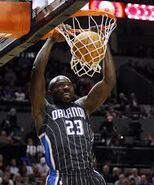