NBA commissioner David Stern referred to Sloan as "one of the greatest and most respected coaches in NBA history". Sloan had a career regular-season win–loss record of 1,223–803, placing him third all-time in NBA wins at the time he retired. Sloan was only the fifth coach in NBA history to reach 1,000 victories and is one of two coaches in NBA history to record 1,000 wins with one club (the Utah Jazz). He also coached for one team longer than anyone in NBA history. The 2009–10 season was his 22nd season (and 21st full season) as coach of the Jazz. Sloan coached the Jazz to 15 consecutive playoff appearances from 1989 to 2003. Although he never won a Coach of the Year award, he is one of only four coaches in NBA history with 15-plus consecutive seasons with a winning record (Gregg Popovich, Pat Riley and Phil Jackson are the others). He led Utah to the NBA Finals in 1997 and 1998, but lost to the Chicago Bulls both times.

After Tom Kelly stepped down as manager of the Minnesota Twins in Major League Baseball in 2001, Sloan became the longest-tenured head coach in American major league sports with their current franchise. He resigned on February 10, 2011. On June 19, 2013, the Utah Jazz announced that Sloan was returning as an adviser and scouting consultant.

Sloan died on May 22, 2020, after having been diagnosed with Parkinson's disease and Lewy body dementia in 2016. 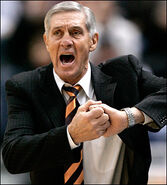 Add a photo to this gallery

Retrieved from "https://basketball.fandom.com/wiki/Jerry_Sloan?oldid=66961"
Community content is available under CC-BY-SA unless otherwise noted.