After playing one year of college basketball for Tyler Junior College, he transferred to Marquette University. He was drafted with the 30th overall pick in the 2011 NBA draft by the Chicago Bulls.

Nicknamed "Jimmy Buckets", Butler is a five-time NBA All-Star, a three-time All-NBA Team honoree, and a four-time NBA All-Defensive Team honoree. In 2015, he was named the NBA Most Improved Player.

Butler was forced to go through a rough childhood after being homeless for a period of time, temporarily living at friends' houses from time to time. While playing basketball at Tomball High School, he became friends with a football and basketball player at the school, Jordan Leslie, whose family allowed Butler to stay at his house. Jimmy Butler averaged 16.0 points per game and was named the teams' most valuable player during his high school years.

Jimmy Butler first attended Tyler Junior College (Tyler, TX) for his freshman year after failing to be a popular recruit.

For his sophomore season, he transferred to Marquette before an unsuccessful season, where Butler averaged just 5.6 points and 3.9 rebounds. Perhaps NBA players such as Wesley Matthews and Lazar Hayward are to blame. Both along with current professional basketball playersJerel McNeal and Dominic James used to dominate the scoring category in the 2008-09 college basketball season.

After Wesley Matthew's departure before the 2009-10, Jimmy Butler (who was named a starter) and Lazar Hayward helped Marquette reach their 5th consecutive NCAA Tournament appearance. With a field goal percentage of .530 at the end of his junior year, Butler also proved to be one of the most efficient shooters on the team.

Jimmy Butler continued to play an important role for his team in his senior season. He was only beaten in the scoring category by junior Darius Johnson-Odom and the newcomer Jae Crowder also played a crucial role. Butler finished his season breaking his personal scoring record although he had a less successful season otherwise. He was also invited to the Reese's College All-Star Game, where he recorded 12 points, 6 rebounds, and 4 assists in a 108-113 loss. In the same season, Jimmy Butler was named Portsmouth Invitational Tournament MVP after participated in the Portsmouth Invitational Tournament , where he averaged 18.7 points, 4.7 rebounds, and 4.0 assists.

Jimmy Butler was selected as the 30th overall pick in the 2011 NBA Draft by the Chicago Bulls. He started his pro career with a rough rookie season, averaging just 2.6 points per game, being on the bench for the entire season. It wasn't until the next season that he would figure things out and become one of the most improved players in the NBA. In the 2012-13 season, Jimmy Butler averaged a much higher 8.6 points per game, and recorded 18 points with 8 rebounds, 3 assists, and 3 steals in his first NBA start following starter Luol Deng's injury. By the end of the season, seeing Butler as a starter was common because of his defensive skills. In the playoffs of that season, Jimmy Butler averaged 40.8 MPG in 12 games of postseason play.

In the Bulls' season opener on October 27, Butler scored a team-high 24 points in a 105–99 win over the Boston Celtics. On November 9, he had a 39-point effort in a 115–107 loss to the Atlanta Hawks. Three days later, he scored 37 points, hit all 14 free throws, grabbed eight rebounds and dished out a season-high nine assists in a 106–95 win over the Washington Wizards. On November 20, he scored a season-high 40 points in a 118–110 win over the Los Angeles Lakers. The following day, he was named Eastern Conference Player of the Week for games played Monday, November 14 through Sunday, November 20. On December 28, he matched his season high with 40 points and hit a 20-footer at the buzzer to give the Bulls a 101–99 comeback victory over the Brooklyn Nets. Butler scored nine points in the final 2½ minutes to rally Chicago. He finished 11 for 11 from the free-throw line and grabbed 11 rebounds as the Bulls overcame a seven-point deficit in the final three minutes.

On January 2, 2017, Butler scored 52 points in a 118–111 win over the Charlotte Hornets. He was a point shy of his career high, which he got on January 14, 2016, and scored 20 points in the first half and 17 in the game's final four minutes. He also had 12 rebounds and six assists while shooting 21-of-22 from the free-throw line. On January 7, he hit the 40-point mark for the third time in six games, finishing with 42 points in a 123–118 overtime win over the Toronto Raptors. Two days later, he was named Eastern Conference Player of the Week for games played Monday, January 2 through Sunday, January 8. On January 19, Butler was named a starter on the Eastern Conference All-Star team for the 2017 NBA All-Star Game. After questioning the desire of the team's younger players following a loss to the Atlanta Hawks on January 25, Butler was fined and held out of the starting lineup against the Miami Heat on January 27 as punishment. He subsequently finished with just three points on 1-for-13 shooting. On February 25, 2017, he recorded his third career triple-double with 18 points, 10 rebounds and 10 assists in a 117–99 win over the Cleveland Cavaliers. On March 26, 2017, he had 20 points and a career-high 14 assists in a 109–94 win over the Milwaukee Bucks. On April 6, 2017, he recorded his fourth career triple-double with 19 points, 10 rebounds and 10 assists in a 102–90 win over the Philadelphia 76ers. 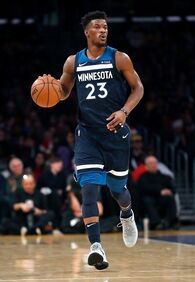 On June 22, 2017, the day of the NBA draft, the Chicago Bulls traded Butler and their 16th pick to the Timberwolves for Kris Dunn, Zach LaVine, and the 7th pick in the 2018 NBA draft who turned out to be Lauri Markkanen.

Shortly before training camp in 2018, Butler requested a trade from the Timberwolves, indicating he would not re-sign with the team in the 2019 off-season. When a trade was not achieved prior to the start of the regular season, Butler opted to play for Minnesota in 2018–19. He appeared in 10 of the Timberwolves' first 13 games before being traded in early November.

On November 12, 2018, Butler was traded, along with Justin Patton, to the Philadelphia 76ers in exchange for Jerryd Bayless, Robert Covington, Dario Šarić and a 2022 second-round draft pick.

On July 6, 2019, Butler signed with the Miami Heat via a sign and trade with the 76ers in a four-team trade.

On December 9, 2019, Butler was named Eastern Conference Player of the Week after he averaged 27.5 points, 9.0 rebounds and 8.5 assists per game. On December 10, Butler recorded a career-high 18 rebounds, along with 20 points and 11 assists in a 135–121 overtime win against the Atlanta Hawks. On January 30, Butler was named to his fifth NBA All-Star Game.

The Heat reached the NBA Finals after defeating the Boston Celtics in the Eastern Conference Finals in 6 games, earning Butler his first Finals appearance. In Game 3 of the 2020 NBA Finals, Butler finished with 40 points, 11 rebounds, and 13 assists and became the third player in Finals history to record a 40+ point triple-double, joining LeBron James (then with the Cleveland Cavaliers) in 2015 and Jerry West with the Los Angeles Lakers in 1969. Butler also became the first player to have more points, rebounds, and assists in a Finals game than James, who finished with 25 points, 10 rebounds, and eight assists. In Game 5, Butler had 35 points, 12 rebounds, 11 assists, and 5 steals to become the first player to register 35+ points, 10+ rebounds, 10+ assists, and 5+ steals in a Finals game. He is also the second player to reach such stats in NBA playoff history after Gary Payton in 2000. Butler became the second player with multiple 30-point triple-doubles in the same Finals series, joining James in 2015. He became the sixth player with multiple triple-doubles in a Finals series along with James, Magic Johnson, Larry Bird, Wilt Chamberlain, and Draymond Green. The Heat came up short against the Los Angeles Lakers, losing in six games. Eventually, Butler became only the second player in a Finals series to lead his team in points, rebounds, assists, steals, and blocks, joining James in 2016.