Michigan State men's basketball team has a long history that is rich in tradition. The team has won two NCAA championships and 12 Big Ten championships in men's basketball. The Spartans won the National Championship in both the 1979 NCAA Tournament and 2000 NCAA Tournament. The 1979 National Championship story line was highly touted as Magic vs. Bird. It was achieved by a team under the coaching of Jud Heathcote that included MVP Magic Johnson, Greg Kelser and Jay Vincent. MSU beat the then undefeated Indiana State Sycamores, led by future NBA hall of famer Larry Bird. The 2000 National Championship was achieved by Morris Peterson, A.J. Granger, Charlie Bell, Jason Richardson and MVP Mateen Cleaves leading the team in a victory over the Florida Gators.

On December 13, 2003, Michigan State and Kentucky played at the most-attended college basketball game in history known as the Basketbowl. They played this game in front of 78,129 people at Ford Field, a football stadium converted to a basketball court for this game in Detroit. Kentucky won this game by a score of 79–74.[2]

Of all MSU coaches who have headed the Spartans basketball squad in at least a dozen games, Izzo is second in winning percentage and no MSU coach tops him since 1910. Former coach George E. Denman won all 11 games he coached between 1901–03 and Chester L. Brewer won 70 of 95 games from 1903 to 1910.[3]

The source of this information is the 2007-08 Michigan State men's basketball media guide.[3]

Jud Heathcote led the Spartans to the 1979 national championship and coached one of the game's all-time greats, Earvin "Magic" Johnson. Heathcote succeeded Gus Ganakas, who is currently an MSU basketball radio announcer, as coach in 1976. Heathcote stepped down in 1995 with nine NCAA appearances, three Big Ten championships and three NIT appearances.

Results by season under Heathcote:[3]

Since 1995, the team has been coached by Tom Izzo, who has a overall record of 369–147 as head coach at Michigan State.[5] Izzo coached the Spartans to their second national championship in 2000 with an 89–76 victory over Florida. Izzo has guided the Spartans to six of twelve NCAA Final Fours from 1999 to 2010, an accomplishment unmatched by any other college basketball program during that span. The coach has also appeared in a postseason tournament every year he has headed the MSU basketball program.

Results by season under Izzo:[3]

The Spartans have appeared in 24 NCAA men's basketball tournaments with 2 NCAA men's basketball national championships. They also count 8 Final Fours and sport a 52-22 all-time NCAA tournament record following their most recent performance the 2010 NCAA tournament. Michigan State has been in the Sweet Sixteen 9 of the last 13 years. Michigan St. has outperformed their tournament seed more than any other team in Division I basketball. Only Duke has more appearances. They also have appeared in 7 of the last 12 Elite Eights. As well, 6 of the last 12 Final Fours, in which no other team has accomplished this mark.[10] MSU has accepted a bid to the National Invitation Tournament five times, the most recent being in 1997.[11]

The NCAA began seeding the tournament with the 1979 edition.

The current home jersey, introduced as part of a rebranding effort by the athletic department in April 2010, is white with green uniform numbers and a green custom font "SPARTANS" across the chest.[15] The road jersey is green with white uniform numbers and a white custom font "SPARTANS" across the chest.[15] The Spartans do not currently wear an official alternate uniform but the team has worn a silver alternate and a 1979 throwback uniform in the past.

Nike, Inc. started making jerseys for the team at the start of the 2000-01 season. 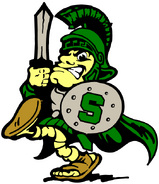 The Spartans play home games at the Jack Breslin Student Events Center on campus in East Lansing, Michigan. The arena is commonly referred to as "the Breslin" and "the Bres", and was opened in 1989. It is named for Jack Breslin, an MSU alumnus, former athlete and administrator, who first began pushing for the arena in 1969. Its capacity is 16,280 seats, and the stadium superseded Jenison Fieldhouse.

The arena's current basketball court is the same floor where the Spartans won the 2000 NCAA Men's Division I Basketball Tournament, which was at the RCA Dome in Indianapolis. The school purchased the floor from the NCAA and Final Four floor installer Horner Flooring after the title game. A plaque was installed on the baseline near the Michigan State tunnel to commemorate the floor's purpose in the school's history.[16]

The Breslin Center is home to the Izzone, a large student section named after Coach Izzo, the basketball team's head coach since 1995. The student section had been named Spartan Spirits prior to Izzo's prominence at the school. The Izzone routinely gets mentioned in discussions of the nation's top student fan sections. The Izzone was mentioned as the 3rd best in the land[17] The section helped cheer the Spartans to a 53-game home win streak between 1998 and 2002 and also a 28 game winning streak from 2007 and 2009.[18]