Basketball Wiki
Register
Don't have an account?
Sign In
in: Pages with reference errors, Born in 1987, Shooting Guards,
and 9 more

Oliver J'Anthony Mayo is an American professional basketball player who is currently a Free agent. He is known as "Juice." [1] He played college basketball for the University of Southern California (USC). As an athlete at Huntington High School (West Virginia) and North College Hill High School in Cincinnati, he was considered by several media outlets to be the best high school basketball player in the United States.[2]

He chose to enter the 2008 NBA Draft instead of completing his three remaining years of college eligibility; when he chose Bill Duffy and Associates as his agency, he lost his NCAA eligibility. He was taken third overall by the Minnesota Timberwolves on June 26, 2008.[3] Following the draft, Minnesota traded him and three other players to the Memphis Grizzlies in exchange for Kevin Love and three players.

"Mayo commuted across the West Virginia/Kentucky border for grade school to attend Rose Hill Christian School in Ashland, Ky. In Kentucky, a high school athlete does not have to be in ninth grade to play for the varsity, so as a seventh-grader, his high school basketball career began. He averaged 23.1 points for the varsity team while in seventh grade and received his first recruiting letter. In eighth grade, he averaged 20.5 points per game and was selected as a first-team all-state player by the Louisville Courier. Mayo then moved to Cincinnati to live with his "adopted grandfather" and AAU coach Dwaine Barnes and enrolled at NCH, where his arrival was broadcast live on the local television stations."[5]

The 18 year-old junior guard was selected as Mr. Basketball of Ohio for the second consecutive season, in addition to being named Associated Press Division III Player of the Year for the second consecutive season. He averaged nearly 29 points, nine rebounds, and six assists per game. He also led his team to three consecutive AP poll titles and garnered much attention from the media, appearing in the pages of Sports Illustrated among other publications. Much like another high school star from Ohio (St. Vincent-St. Mary High School), LeBron James, Mayo drew large enough crowds to force his team into seeking larger venues to support the growing crowds, and often attracted National Basketball Association stars such as James and Carmelo Anthony to watch his games playing for the D-1 Greyhounds.

In February 2006, Mayo attracted the largest crowd to ever see a high school game in Cincinnati, Ohio. 16,500 fans watched North College Hill fall to the nation's number one rated team, Oak Hill Academy (Virginia).[6] Mayo had been considered a lock to make the leap straight from high school to the NBA, but the Collective Bargaining Agreement between the NBA and its players instituted a rule that a player must be at least a year out of high school before he can enter the NBA, effectively curtailing those plans. On July 5, 2006, it was reported by ESPN that he would attend USC.[7] On July 8, however, WSAZ-TV reported that USC was only one of three colleges that Mayo was considering: the other two being Kansas State University and the University of Florida.

On August 27, 2006, WSAZ-TV reported that Mayo enrolled at Huntington High School (West Virginia) in Huntington, West Virginia for the 2006-07 school year.[8] He formally committed to USC in November 2006.[9]

In January 2007, Mayo allegedly assaulted referee Mike Lazo after being ejected from a Huntington High game vs. Capital High School at the Charleston Civic Center.[10] According to West Virginia Secondary School Activities Commission rules, Mayo was suspended for two games. However, due to allegations supported by video evidence that Lazo had overreacted and faked the incident, a temporary restraining order was signed by Cabell County, West Virginia Circuit Court Judge Dan O'Hanlan, temporarily lifting the suspensions on Mayo and five other players suspended due to incidents at that game.[11] However, shortly after, the restraining order was nullified and Mayo was suspended for three games, a punishment that Mayo described as "fair."[12]

On March 9, 2007, Mayo and three other men were cited by the Cabell County, West Virginia Sheriff's Dept. for misdemeanor simple possession of marijuana. Officers found the cannabis in a car in which Mayo was a passenger and, since no one claimed possession, all occupants were ticketed.[13] Charges against Mayo were dropped on March 12, 2007 after one of the other passengers in the vehicle took responsibility for the marijuana.[14]

Mayo was selected by the West Virginia Sports Writers Association as the 2007 recipient of Bill Evans Award for the state's boys basketball player of the year. Mayo led the state in scoring for the 2006-2007 season at 28.4 points per game. Runner-up in the voting was teammate Patrick Patterson.[15]

On March 17, 2007, Mayo led Huntington High School to its third consecutive Class AAA basketball championship in the state of West Virginia with 103-61 rout of South Charleston. Mayo finished with a triple-double; 41 points, 10 rebounds, and 11 assists. In his final moments with a minute left in the game, Mayo threw the ball off the backboard from the free-throw line, caught it in midair, and dunked. He then threw the ball deep into the stands and held up three fingers, a reference to Huntington High's three-straight basketball state championships.[16]

He graduated in May 2007 and signed a letter of intent to enroll at USC. He scored an impressive 29 on the ACT, placing him in the 95th percentile nationally[17]

Mayo had given Kansas State a soft verbal commitment to play for them[18], but retracted it when head coach Bob Huggins announced he would take the same position at West Virginia. Frank Martin, whom Mayo was recruited by, was named head coach. Former teammate at North College Hill High School Bill Walker opted to stay and play for Martin.

In the 2008 Pacific-10 Conference Men's Basketball Tournament, the Trojans lost to UCLA, featuring Kevin Love, in the semi-finals. Both Mayo and Love were selected to the All Pac-10 tournament team. In his NCAA Tournament debut with the Trojans, Mayo scored 20 points as USC was beaten by Kansas State and freshman Michael Beasley.

Mayo did not return for his sophomore season, opting to enter the 2008 NBA Draft.

On May 11, 2008, ESPN.com reported that a former "confidant" Lewis Johnson revealed on ESPN's TV show Outside the Lines that Mayo received numerous gifts in violation to NCAA rules. The report states that Mayo received the gifts from Rodney Guillory before and during his tenure at USC. Guillory is said to have received the money from the Bill Duffy Associates Sports Management (BDA).[20]

On June 26, 2008, O. J. Mayo was selected 3rd overall in the 2008 NBA Draft by the Minnesota Timberwolves. Later that day, he was traded to the Memphis Grizzlies, along with Marko Jaric,Antoine Walker, and Greg Buckner, swapping them for the 5th overall pick Kevin Love, Mike Miller, Brian Cardinal, and Jason Collins. Mayo was a part of the Select Team that helped get the U.S. national team ready for the 2008 Summer Olympics in Beijing. In his NBA Summer League debut, Mayo had 15 points to lead the Grizzlies to an 88–75 win over the New Orleans Hornets. During his rookie season, Mayo scored 30 or more points seven times. Mayo was the runner-up for the 2008–09 NBA Rookie of the Year Award, finishing second behind Chicago Bulls point guard Derrick Rose.

Mayo was late for a game-day shootaround and was taken out of the starting lineup starting November 20, 2010. On a return flight to Memphis from Los Angeles, Mayo was involved in a fight with teammate Tony Allen over a debt from an in-flight card game. On January 27, the NBA suspended Mayo for 10 games following a positive test for the steroiddehydroepiandrosterone (DHEA), which violates the league's anti-drug program. Mayo blamed an over the counter supplement that he didn't know was banned by the NBA for the positive test, but he declined to say which supplement he used. He later said an unnamed energy drink he bought at a gas station contained the banned substance.

Despite playing in all 66 games of the shortened 2011–12 season, Mayo did not start in any games for the Grizzlies, playing as a sixth man. When he was asked if being a reserve hurt his value, he answered: "I would say so, I would probably say so. What do you think?"

The Grizzlies did not sign a qualifying offer sheet for Mayo, making him an unrestricted free agent. Mayo posted on his official Twitter on July 16, 2012, saying, "I will be signing with dallas! #Mavsnation," meaning he would be playing with the Dallas Mavericks during the 2012–13 season. On July 19, Mayo officially signed with the Mavericks.

On December 6, against the Phoenix Suns, Mayo made a tough fall-away jumpshot over Sebastian Telfair with 35 seconds left, and the Mavericks won the game 97–94. On December 8, Mayo tied his career-high of 40 points in a game against the Houston Rockets. Two days later, he tied a career high of playing 52 minutes in a double-overtime loss to the Boston Celtics. In his first game against his former team, Mayo scored only 10 points on 27% shooting. On December 28, 2012, Mayo had a career high of 5 steals against the Denver Nuggets.

On January 10, 2013, Mayo recorded 24 points and 10 rebounds, a season high, in a 117–112 victory over the Sacramento Kings. On January 16, against the Rockets, Mayo, Dirk Nowitzki, and Dahntay Jones, combined for 8 free throws in the final minute of play to win the game 105–100. Two days later, Mayo made a game-tying three-pointer with two defenders in his face against the Thunder at the end of regulation. The Mavericks would lose in the extra period, 114–117. In the final seconds of a game against the Portland Trail Blazers, Mayo was called for a charge on Ronnie Price. With 1.5 seconds left in the game, LaMarcus Aldridge hit a game-winning jump shot off an inbounds play. The next day the NBA office said the call should have been a blocking foul, which would have granted Mayo two free-throws.

On March 6, Mayo recorded a new career high of 12 assists against the Houston Rockets. After Nowitzki, the Mavericks' all-time leading scorer, returned, Mayo saw his scoring average dip. Mayo said, "I'm a scorer and can shoot the ball a little bit, but I like to be a playmaker. I like to try to take what the defense gives you and not just concentrate on scoring the ball. Find other guys." Mayo saved the Mavericks in a game against the Los Angeles Clippers on March 26. In the final minute of regulation, Vince Carter put Dallas ahead with two free throws before Chris Paul answered with his own basket. After a turnover by Carter, Paul hit another tough layup on the baseline, setting up Mayo's tying bucket. He slipped the ball in from behind the backboard to tie the score at 97-all with 0.6 seconds left. The Mavericks won the game 109–102.

Mayo finished the season with averages of 15.3 points, 4.4 assists and 3.5 rebounds while playing a team-high 35.5 minutes per game. His production dropped considerably after the All-Star break, when star player Nowitzki re-emerged after missing the first 27 games. On April 18, 2013, he announced he would decline the player option on his contract for the following season and become a free agent. 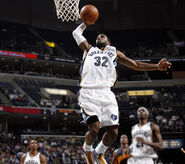