Basketball Wiki
Register
Don't have an account?
Sign In
Advertisement
in: Born in 1985, Point Guards, American basketball players,
and 5 more

Sebastian Telfair (born June 9, 1985) is an American professional basketball player who is currently a free agent. Telfair was the 13th overall pick in the 2004 NBA draft by the Portland Trail Blazers out of Abraham Lincoln High School. He had committed to the University of Louisville and head coach Rick Pitino during his senior year, but decided to turn professional instead.[1][2] Telfair is the cousin of former NBA player Stephon Marbury.[3]

Telfair was born in Brooklyn, New York, the son of Erica Telfair and Otis Telfair, a Marine who served in Vietnam.[4] Living in the Surfside Gardens projects he attended Abraham Lincoln High School and became one of the most highly coveted high school basketball prospects in the country.[5]

Considered a five-star recruit by Rivals.com, Telfair was listed as the No. 2 point guard and the No. 6 player in the nation in 2004.[6] He had originally committed to the University of Louisville. He changed his mind and went pro, however, after a fatal shooting occurred at the apartment complex where his family lived.

Telfair was selected by the Portland Trail Blazers with the 13th overall pick in the 2004 NBA draft. On January 1, 2005, Telfair scored 14 points on five-for-eleven shooting, making four of five free throws to go with five rebounds and five assists with one turnover.[7] In February 2005, interim coach Kevin Pritchard promoted Telfair to the starting lineup. Telfair averaged 6.8 points and 3.3 assists and the Trail Blazers ultimately lost 23 of their final 28 games while finishing with the team's worst record since 1973–74.

Under new head coach Nate McMillan, Telfair began the 2005–06 season as the starting point guard. He was occasionally paired in the backcourt with another high school draftee taken in 2005, Martell Webster. Telfair's production was an improvement over his 2004–05 numbers, but it was still consideredTemplate:By whom below par for an NBA starting point guard. As a result, he experienced increasing pressure from the Portland media. In December 2005, Telfair suffered a thumb injury and was replaced in the starting lineup by Steve Blake. Blake had fewer turnovers and more assists. Telfair returned to the court on January 9, 2006, after missing 12 games. Blake continued to start with Telfair coming off the bench. Although the Trail Blazers were already eliminated from playoff contention, Telfair scored the winning basket against the Houston Rockets on April 5, 2006.

On June 28, 2006, the Trail Blazers traded Telfair along with center Theo Ratliff and a 2008 second-round pick to the Boston Celtics for guard Dan Dickau, center–forward Raef LaFrentz, and the 7th overall pick in the 2006 NBA Draft, Randy Foye, who was traded to the Minnesota Timberwolves for the 6th overall pick, Brandon Roy. Telfair wore number 30, as his traditional number 31 was retired by the Celtics.

On April 24, 2007, Celtics managing partner Wyc Grousbeck announced that Telfair's nameplate on his Celtics locker had been removed and did not expect him back for the 2007–08 season.[8][9]

On July 31, 2007 the Celtics traded Telfair, along with Al Jefferson, Gerald Green, Ryan Gomes, Theo Ratliff and two first-round draft picks, to the Minnesota Timberwolves for Kevin Garnett.[10] He was given the # 3 jersey while with Minnesota, the same number that his cousin, Stephon Marbury wore while playing for them.

In the 2007–08 season, Telfair had his best season as a pro averaging 9.3 ppg and 5.9 apg. Telfair also had a stretch of five games in which he had 40 assists and just 4 turnovers. He wore number 3 for the Timberwolves because the number 31 was taken by then shooting guard Ricky Davis.

On July 22, 2008 the Minnesota Timberwolves re-signed Telfair to a three-year contract. Because the Timberwolves fired head coach Randy Wittman and replaced him with interim coach Kevin McHale, Telfair played for his sixth coach in his fifth NBA season. He played in 75 games including 43 starts.

On July 20, 2009, Telfair was traded to the Los Angeles Clippers along with Craig Smith and Mark Madsen in exchange for Quentin Richardson.[11]

On February 17, 2010, Telfair was traded from the Los Angeles Clippers to the Cleveland Cavaliers as part of a three-team, six-player trade that sent Antawn Jamison from the Washington Wizards to Cleveland, Žydrūnas Ilgauskas, a 2010 first round pick (which became Lazar Hayward) and the rights to Emir Preldžič from Cleveland to Washington, Drew Gooden from Washington to Los Angeles, and Al Thornton from Los Angeles to Washington.[12]

Return to the Minnesota Timberwolves

On July 26, 2010, Telfair was traded back to the Minnesota Timberwolves, along with Delonte West, for Ramon Sessions and Ryan Hollins.[13]

Right after the 2011 NBA lockout ended, Telfair signed with the Phoenix Suns in December 9, 2011.[14] His contract had him initially staying for one year, but he received a team option to play for a second season in Phoenix. Telfair started for the Suns in a 91-87 victory against the Los Angeles Clippers. Telfair would score a season high 21 points in a 105-91 loss to the San Antonio Spurs. During the month of April in the shortened season, Telfair averaged an impressive 10.9 points and 3.6 assists on a .522 shooting percentage. In other months, he averaged 4.7 points and 1.9 assists on a .358 shooting percentage.[15]

On February 21, 2013, Telfair was traded to the Toronto Raptors in exchange for Hamed Haddadi and a second-round pick.[16] He became a free agent in the summer of 2013.

In October 2013, Telfair signed a one-year deal with the Tianjin Ronggang of the Chinese Basketball Association.[17]

On October 16, 2006, Telfair had a chain reported to be worth $50,000 snatched from him while he was outside Sean "Diddy" Combs' restaurant, Justin's. Rapper Fabolous was shot outside of the same club shortly afterward.[21] The following night, Telfair left a preseason basketball game against the New York Knicks at Madison Square Garden to observe a police lineup, but he did not identify any of the potential suspects.[22]

Telfair and a friend, Al Eden Fuentes,[23] were arrested early on April 20, 2007 and charged with felony possession of a weapon, after a traffic stop.[24] The traffic stop was prompted when Telfair was spotted driving his 2006 Range Rover 77 mph on the Bronx River Parkway, a 45 mph zone. Telfair was driving under a suspended Florida license. When the police searched Telfair's vehicle, a loaded .45 caliber handgun was found under the passenger's seat. Both Telfair and Eden claimed to not have any knowledge of the handgun. Police had yet to determine the registration status of the handgun.[23]

In September 2008, Telfair pleaded guilty to criminal possession of a weapon and received three years probation. In October 2008, the NBA handed down a three-game suspension following the guilty plea.[25]

On June 11, 2017, Telfair and another man were arrested for handgun and controlled substance charges during a traffic stop. A subsequent search of the vehicle revealed three loaded firearms, one semiautomatic rifle, a ballistic vest and two bags of marijuana.[26]

See also: Through the Fire (film)

Telfair is the subject of the book The Jump: Sebastian Telfair and the High-Stakes Business of High School Ball (Template:ISBN) by Ian O'Connor, and Through the Fire, a documentary film by Jonathan Hock which follows Telfair through his last year in high school and his decision to choose the NBA over college. Telfair is the cousin of former NBA and current CBA player Stephon Marbury, and the half-brother of former NBA player Jamel Thomas. Telfair went to high school at Lincoln High School in the Coney Island section of Brooklyn, New York City, and was the school's all-time leading scorer until Lance Stephenson broke his record in 2009. Telfair was also named New York State Mr. Basketball following his senior season at Lincoln. His younger brother Ethan Telfair, who was featured in the film now plays basketball at Idaho State.[27][28] 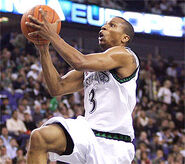