Basketball Wiki
Register
Don't have an account?
Sign In
Advertisement
in: Born in 1979, Florida natives, Retired,
and 27 more

Tracy Lamar McGrady Jr. (born May 24, 1979), also nicknamed "T-Mac", is an American former professional basketball player, best known for his career in the National Basketball Association (NBA). McGrady is a seven-time NBA All-Star, seven-time All-NBA selection, two-time NBA scoring champion, and one-time winner of the NBA Most Improved Player Award. He was inducted into the Naismith Memorial Basketball Hall of Fame as part of the Class of 2017.

McGrady entered the NBA straight out of high school and was selected as the ninth overall pick by the Toronto Raptors in the 1997 NBA Draft. Beginning his career as a low-minute player, he gradually improved his role with the team, eventually forming an exciting duo with his cousin Vince Carter. In 2000, he left the Raptors for the Orlando Magic, where he became one of the league's most prolific scorers and a candidate for the NBA Most Valuable Player Award. In 2004, he was traded to the Houston Rockets, where he paired with center Yao Ming to help the Rockets become a perennial playoff team. His final seasons in the NBA were plagued by injuries, and he retired in 2013 following a brief stint with the Qingdao DoubleStar Eagles of the Chinese Basketball Association (CBA) and San Antonio Spurs.

Since retiring, McGrady has worked as a basketball analyst for ESPN. From April to July 2014, he realized his dream of playing professional baseball, pitching for the Sugar Land Skeeters of the Atlantic League of Professional Baseball.

McGrady plays both Shooting Guard and Small Forward, and is also one of the first players who went from high school (Mt. Zion Christian Academy) straight to the NBA without attending college. He created national buzz after his performance in the Adidas ABCD Camp, to which the best high school players in the nation are invited annually. He was named high school Player of the Year by USA Today.

Due in part to his strong showing at the ABCD camp, McGrady was selected ninth overall in the 1997 NBA Draft by the Toronto Raptors. Chicago Bulls GM Jerry Krause had arranged a draft-day trade to send Scottie Pippen to Toronto for the 9th overall pick, which he would have used to take McGrady. Krause decided not to make the deal when Michael Jordan threatened to retire if it was made.

The teammate and cousin (by marriage) of Vince Carter, McGrady often found himself in Carter's shadow. While Carter was responsible for scoring, it was McGrady's job to be the team's defensive stopper and ball distributor. The duo of Carter and McGrady led the Raptors to their first playoff berth in the 2000 Playoffs, but they were swept by the New York Knicks in 3 games.

The two also participated in the 2000 NBA Slam Dunk Contest.

The Toronto Raptors made a sign-and-trade deal which sent McGrady to the Orlando Magic in exchange for a first round draft pick in 2000. In the 2000–01 season, he won the NBA Most Improved Player Award and was selected as a starter in the All-Star Game. In the 2002–03 season, McGrady captured the NBA scoring title, averaging 32.1 points per game, becoming the youngest player to do so since the NBA/ABA merger. In the 2003–04 season, he once again captured the NBA scoring title, averaging 28 points per game and set an NBA career high when he scored 62 points against the Washington Wizards on March 10, 2004. With this performance, he became the 4th player in the past 12 years to score over 60 points in a game. Despite McGrady's personal accolades, the Magic had failed to reach the second round in the playoffs, and in his fourth season as a Magic, problems with team chemistry, coaching, and management forced Orlando into a downward spiral. The season ended with Orlando failing to reach the playoffs and an impatient McGrady seeking a possible trade.

On June 29, 2004, McGrady, Juwan Howard, Tyronn Lue, and Reece Gaines were traded to the Houston Rockets in a seven-player deal that sent Steve Francis, Cuttino Mobley, and Kelvin Cato to the Magic. In his first year in Houston, McGrady teamed with 16'6" Chinese center Yao Ming, to end the season ranked 5th in the Western Conference. The season started slow for the Rockets when McGrady could not seem to fit in Coach Jeff Van Gundy's offense. By mid-season, Van Gundy altered McGrady's role and made him the primary offensive option over center Yao Ming. On December 9, 2004 he scored 16 points in the last 33 seconds of a game against the San Antonio Spurs, including the game winning 3 pointer with 1.7 seconds left in the game, the Rockets won 81-80.

McGrady has been named to the All-NBA First Team two times, and the All NBA Second Team three times. McGrady is considered one of the most successful prep-to-pros players ever, following in the footsteps of Kevin Garnett, Kobe Bryant, and Jermaine O'Neal. His popularity has him following in the footsteps of Michael Jordan with his own signature shoe line with Adidas, the latest model being the TMAC 5. However, a common criticism on McGrady is the fact that none of his teams have ever advanced past the first round in his NBA career.

06 season the Rockets were 2–15 in games he did not play in and 2–16 in games McGrady did not finish. While McGrady was injured for five games with his back injury, the Rockets did not win a single game. Other injuries include him falling on his tailbone in a game against the Indiana Pacers. The Rockets were relying on their second top scorer Yao Ming to lead them on to the playoffs, a quest in which they were not successful.

On August 16, 2010, McGrady signed a one-year contract with the Detroit Pistons. On December 7, 2010, McGrady returned to Houston for the first time to a mixture of applause and boos from the home crowd and scored 11 points, grabbed 3 rebounds, and dished 3 assists in a 97–83 loss. On January 14, 2011, McGrady scored a season-high of 22 points in a 101–95 win over the Toronto Raptors. McGrady averaged 8.0 points, 3.5 assists, and 3.5 rebounds in 23.4 minutes for the Pistons but they failed to make the playoffs for the second year in a row.

On December 7, 2011, ESPN reported that McGrady agreed to a one-year deal with the Atlanta Hawks for the veteran minimum. In his debut as a Hawk, McGrady finished with 12 points, 2 rebounds, a steal and a block in less than 20 minutes of action in a 106–70 blowout win over the New Jersey Nets. Less than a week later, on January 2, 2012, McGrady scored 13 of his 16 points in the fourth quarter of a game against the then-undefeated Miami Heat, to lead the Hawks to a comeback victory. Over the season, he averaged a career-low 5.3 points per game in 16 minutes per game.

On April 16, 2013, McGrady signed with the San Antonio Spurs just before their season finale, making him eligible to play for them in the playoffs. He chose to wear the No. 1 jersey. The 2012–13 season was the first of McGrady's NBA career that he did not play a regular-season game. The San Antonio Spurs finished 58-24, 2nd best record in the Western Conference. McGrady got his first minutes as a Spur against the Los Angeles Lakers in Game 4 of the first round of the playoffs, logging one assist and one steal. In Game 2 of the NBA Finals, McGrady played his first minutes in a championship series, logging two rebounds and two assists. The Spurs lost the series to the Miami Heat in seven games.

On August 26, 2013, McGrady announced his retirement from the NBA on ESPN's First Take. He noted that the "door's still open" to him playing overseas.

McGrady was selected to the United States men's national basketball team for the FIBA Americas Championship 2003 in San Juan, Puerto Rico. On August 22, McGrady led the Americans with 16 points in a 98–69 victory over Venezuela. McGrady sat out the August 26 game due to a back injury. The U.S. qualified for the 2004 Olympic Games on August 30 with an 87–71 win over Puerto Rico; in the game, McGrady and Puerto Rico's Eddie Casiano were involved in an altercation which resulted in fans throwing drinks and debris on the court. Ultimately, the U.S. advanced to the gold medal game, defeating Argentina to finish a perfect 10–0. For the tournament, McGrady averaged 12.6 points and 2.9 rebounds a game on 54.4 percent from the field and 42.1 percent three-point shooting.

While McGrady has often been compared to Kobe Bryant due in part to their similar statistics, McGrady's skill set and style of play set him apart from other players. He is well known for his head fakes, his crossover dribble, and his ability to create plays off of a screen, whereas Bryant is known for his explosive first step and more of a slasher type of play style. During the 2002-2003, the NBA tried to promote many NBA all-stars and compare them with past greats. The NBA compared McGrady to silky smooth game play of the finger roll master, George Gervin [1].

Due to his recurring back spams and recent injuries, some people have speculated that McGrady might not be as explosive as before; however, he remains as one of the NBA's top scorers and more popular players.

His wife, Clarenda Harris, has a daughter, Layla Clarice, and a son, Laymen Lamar who was born December 27, 2005 during the 82-74 loss against Utah Jazz in which he left during halftime to see Harris going into labor. Tracy and Clarenda were married on September 12, 2006.[2] Tracy's younger brother, Chancellor "Chance" McGrady, played for the 2008 NCAA Division I Men's Basketball Tournament runner-up Memphis Tigers. McGrady and his former teammate Vince Carter are cousins; after McGrady left the Raptors, they had a feud, but it was resolved in a short period of time.

In 2002, McGrady signed a longterm partnership with Adidas, agreeing to an endorsement deal that lasted through his playing career and beyond. Adidas produced a signature line of shoes for McGrady that Complex remembered as "all the buzz in the early-mid 2000s". Upon retiring, McGrady shifted his focus to his business investments, including Dasdak, a Washington, D.C.-based technology company, and Blue-04, a bottled water company in Florida. He was also an initial investor in a Minor League Baseball team which would become the Biloxi Shuckers. Since 2016, he has worked as an NBA analyst for ESPN.

In 2007, McGrady traveled to the Darfurian refugee camps in Chad with John Prendergast and Omer Ismail of the Enough Project. McGrady recruited NBA players to support an initiative linking schools in Darfurian refugee camps to American middle schools, high schools, and universities. Prior to the start of the 2010 season with the Rockets, he changed his jersey number to No. 3 in order to promote his humanitarian efforts in the region and a documentary on his summer visit called 3 Points. In 2008, McGrady was criticized for his comments on the All-Star Game being held in New Orleans, which was only three years removed from the destruction surrounding Hurricane Katrina. McGrady publicly questioned the quality of public safety and protection of NBA players.

On February 4, 2014, McGrady confirmed that he was officially pursuing his dream of becoming a professional baseball player, working with Roger Clemens to become a pitcher for the Sugar Land Skeeters of the Atlantic League of Professional Baseball. On April 23, McGrady made the Skeeters' Opening Day roster. In his debut, he pitched 1+2⁄3 innings, receiving the loss. In July, he started the Atlantic League All-Star Game, where he recorded his first strikeout. After the game, McGrady announced his retirement from baseball. 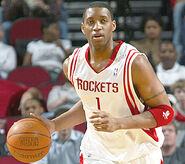