Vlade Divac (born February 3, 1968) is a Serbian professional basketball executive and former player who was most recently the vice president of basketball operations and general manager of the Sacramento Kings of the National Basketball Association (NBA).

Divac spent most of his playing career in the NBA. At 7 ft 1 in (2.16 m), he played center and was known for his passing skills. He was among the first group of European basketball players to transfer to the NBA in the late 1980s and was named one of the 50 Greatest EuroLeague Contributors. He is one of seven players in NBA history to record 13,000 points, 9,000 rebounds, 3,000 assists, and 1,500 blocked shots, along with Kareem Abdul-Jabbar, Tim Duncan, Shaquille O'Neal, Kevin Garnett, Pau Gasol, and Hakeem Olajuwon. Divac was also the first player born and trained outside the United States to play in over 1,000 games in the NBA. On August 20, 2010, he was inducted into the FIBA Hall of Fame in recognition of his play in international competition. He was elected to the Naismith Memorial Basketball Hall of Fame in 2019.

Divac is a humanitarian, helping children in his native country of Serbia and in Africa. In October 2008, he was appointed as government adviser in Serbia for humanitarian issues. In February 2009, he was elected President of the Serbian Olympic Committee for a 4-year term and re-elected in November 2012. In 2013, Divac received an honor from the World Sports Humanitarian Hall of Fame. 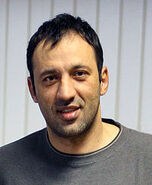